Out of the six preludes in the piano collection December, “The First Noel” is the easiest. Or at least I intended for it to be. As I worked in 2016 to put together my first hymn prelude collection, I was a little concerned that the already existing pieces were on the difficult side, so I wanted this one to be an easier, laid-back prelude. As such, it serves as a good intermediate-level piece to begin with.

After I had finished the piano prelude, my friend composer and choir director, Geoff Groberg, heard it and said he wanted it adapted for our choir. I put something together, borrowing from the accompaniment, and I think it turned out well. We will be performing it twice: once next Sunday at a Stake Conference, and again on Christmas Day at our own ward’s musical sacrament meeting. 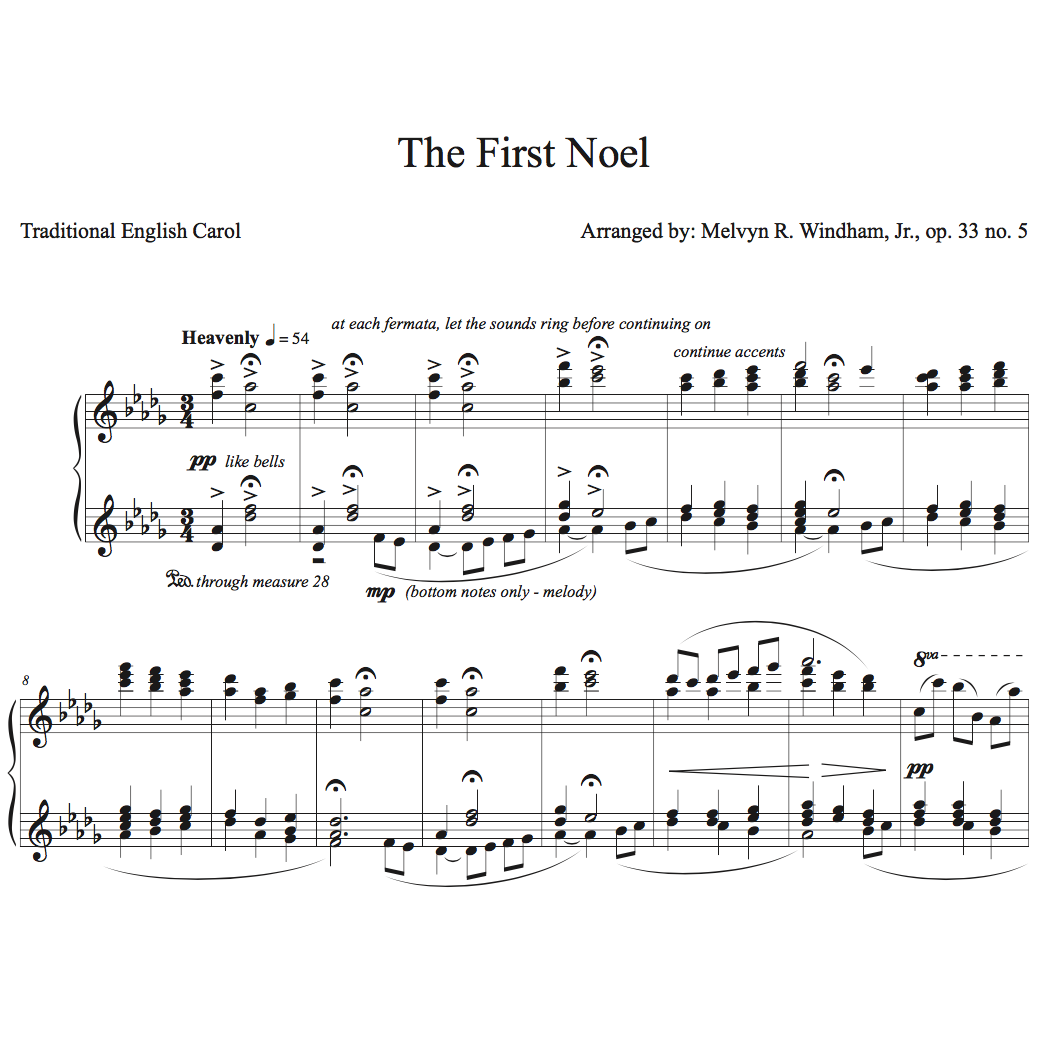 Going for a George Winston feel, the piece starts with the instruction to hold the damper pedal throughout the whole first verse. Just take it nice and slow and let the sounds ring at the fermatas. Make sure to bring out the melody at the very bottom of the left hand. When the right hand begins playing eighth notes, remember to keep it softer than the left hand melody. Just before the second verse, the melody jumps to the right hand, so let it ring.

Don’t lift the pedal until you hit the first downbeat of the second verse. Then the biggest challenge will be the stretches in the left hand. If you take it slow, then with a little practice you should have no problem. Feel free to roll the chords on the downbeats, but keep the rhythm steady and flowing. The right hand has at least two melodies going at the same time; just keep it all flowing.

As you approach the end, slow it down and fade out until you return to the original bell-like tones. Make sure to hold the pedal long enough at the end for the final sounds to fade.

When the choir sings, the piano part is the same, except it must be played faster to keep the singing parts flowing. This can be an extra challenge for the pianist, but with a little practice and muscle memory you should do fine. Note that all fermatas are removed except for the ones at the very end of the piece.

The first verse will be easy for the women — just the melody straight out of the hymnbook. Since it’s in unison, you may consider adding men on the melody an octave lower. Though, I think it’s a nice effect if you have just women first, and then men join in for the second verse for a fuller sound.

The second verse is jazzed up. The sopranos hold on to the melody. The basses sing a simple descending motif matching the bass of the piano. The altos and tenors sing the more flowing secondary melodies, and will often find themselves singing “jazzy” notes. As the tenor part is not very high, you may optionally omit the bass note and have all men sing the tenor part, turning the piece into a SAB variant.

Overall, the piece is not difficult for the singers. Our own ward choir had the parts down after just a couple of practices. It could be a nice and quiet addition to your upcoming Christmas program.

Bonus feature – “The First Noel” on piano played by me: