The “Three Little Sonatinas” are one of six piano collections that will go on sale the last part of August with the launch of Melkim Classical.

This collection gets my humble opus number of 18. Completed in 1990, they were meant to prepare me for composing my first full-fledged sonata (op. 21 — which will also be available in August). As such, these are very short and mostly easy to play. Any would be good for the beginning-to-intermediate learner.

The first movement of each sonatina is a condensed sonata-allegro form with the following sections:

The second movement of each sonatina is a slower form, and the third movement is a Rondo, which has a form of A-B-A-C-A.

Sound samples and videos are at the bottom of the post.

The first movement (Allegro) is so short, it’s almost a joke. Each part of the sonata form takes up only two measures. The ST differs only slightly from the MT.

The second movement (Lento) can go as slow as you need it to go. It starts with two voices. A third voice enters in measure 17, and a fourth voice in the next measure. Your hands will cross at one point – just let the left hand go over the thumb of your right hand.

The third movement (Rondo) is a playful movement, so work with it. You really only need the pedal in measures 42-45. The repeating notes in those four measures may be a small challenge. Just remember to alternate fingers on the same note, and work out what works best for you. 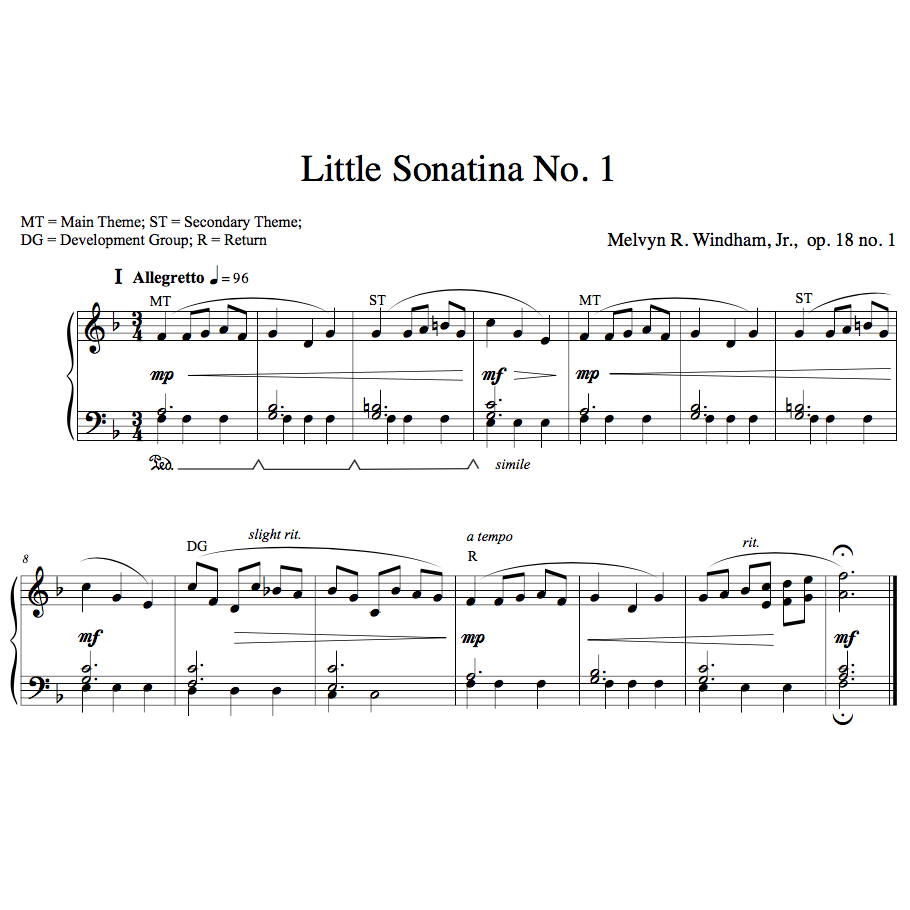 This is the longest of the three little sonatinas.

For the first movement (Allegro), do not use the pedal, though you may be tempted. The MT features whole notes and half notes in the melody (play them legato), while the ST features the running eighth notes. Feel free to play this movement as fast as you can, but make it sound like fun.

The second movement (Adagio) is meant more for milking. Use the pedal liberally. Go slow, and play rubato if desired. Slow down considerably just before the return at measure 54 and build the base going into it. The return changes to 3/4, but keep the same tempo. Go for the pretty ending.

The third movement (Rondo) is more of a raucous jig. Really play out the rhythms. Pedal only where indicated. Really build into the last return at measure 100, and finish loud and bold. 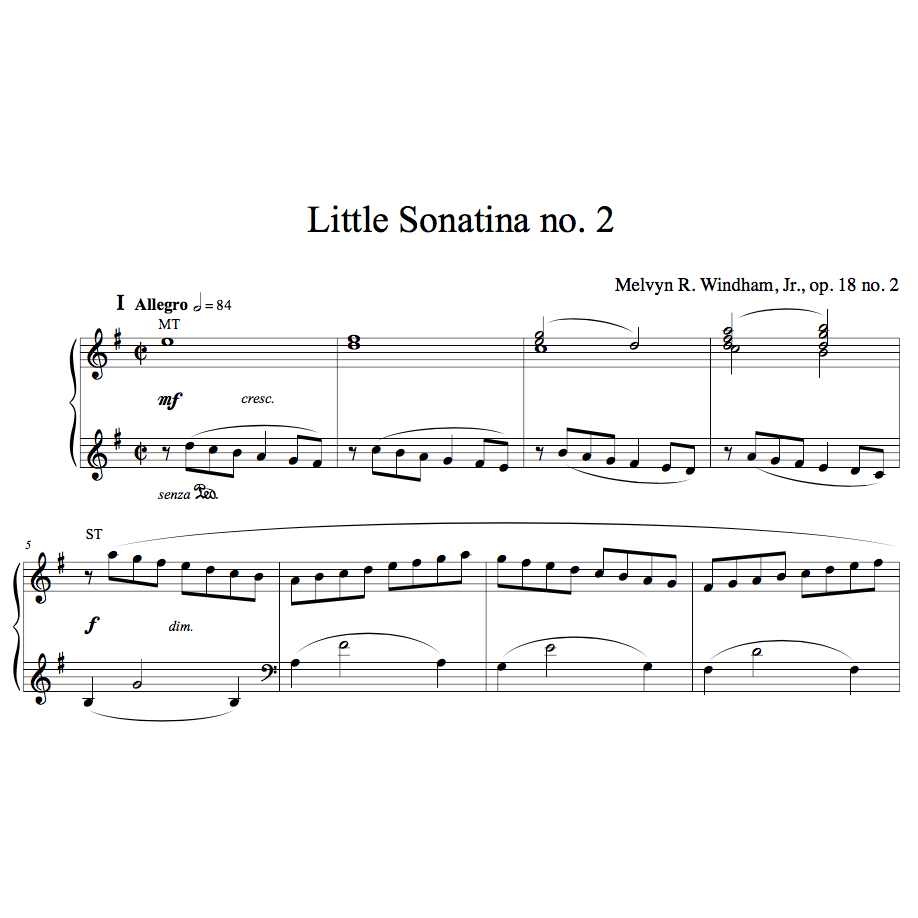 The first movement (With Pomp) makes much more of an attempt to distinguish between the MT and the ST. The MT is very loud, slow, and with pedal. The ST is soft and moves a little faster, with no pedal. Try not to speed up going into the Return at measure 20. Play as loud as you can at measure 24 and also on the very last chord.

The second movement (Minuet) may be the most difficult out of all nine movements in the collection. It was originally composed without piano for an Elder Erickson who asked for a quick composition in his memory book. The Trio of the minuet (starting measure 37) features some fast-moving and sometimes tricky eighth notes. Just make sure to figure out the fingerings and you can avoid tripping over your fingers.

The third movement (Rondo) is meant to be easy to play, yet fun to hear. Often, the left hand doubles the right hand at octaves. When this happens, let it resonate. Do not slow down at the end. 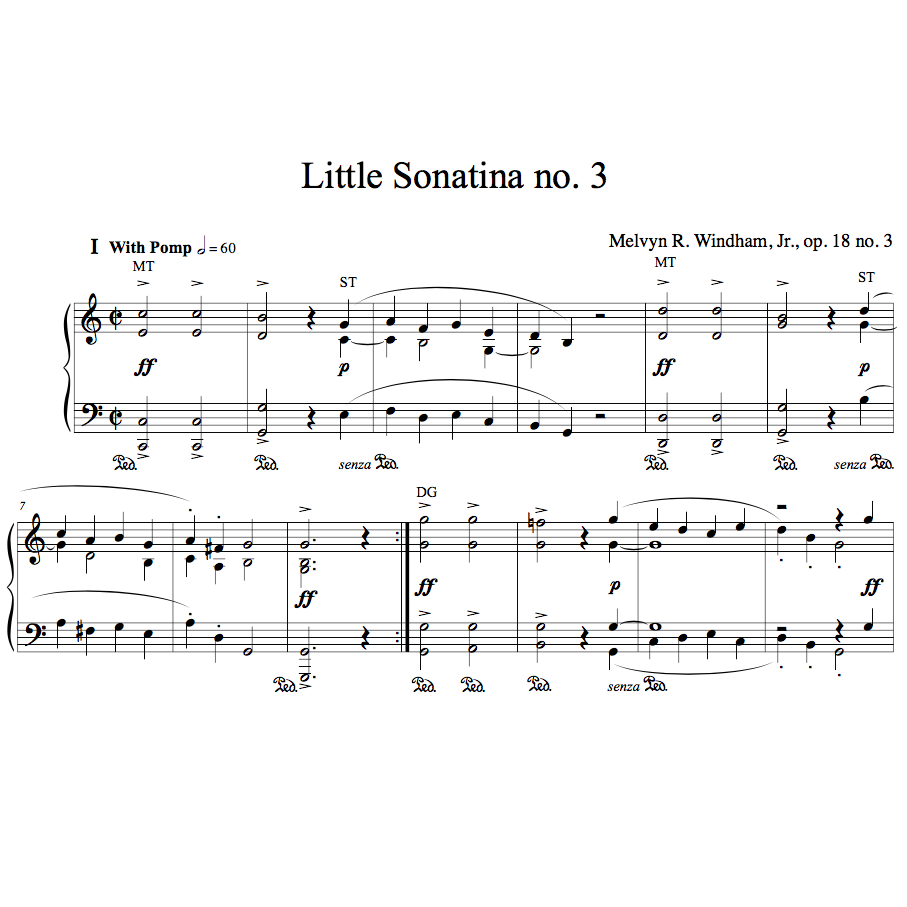 And videos of me playing:

Stay tuned for the launch of Melkim Classical the last part of August.