This is the first piece in which the publisher had no part in composing or arranging. It is an experiment to see if Melkim can sell other composer’s works, as one of our goals is to help bring more composers to light. You can learn more about Reid Gilliam on the About Melkim page. If this proves to be a success, Melkim will then try to branch out further.

This is the first piece based on a tune that is unfamiliar to Mormons. Rather it is a popular Protestant tune. Like other Good Report Music pieces, it remains compatible with most Christian denominations. Should this experiment be successful, we will release more pieces outside of the Mormon sphere.

This is the first organ-only piece that we’ve released. You may notice that we’ve added a new “Church Organ” category. Look for more organ pieces coming in the future.

While serving on a worship committee, Reid Gilliam looked for music to accompany a sermon on the story of Zacchaeus described in Luke 19: 1-10. Finding few useful resources, he decided to arrange his own prelude based on one of his wife’s favorite childhood songs, the popular and playful traditional tune “Zacchaeus.” 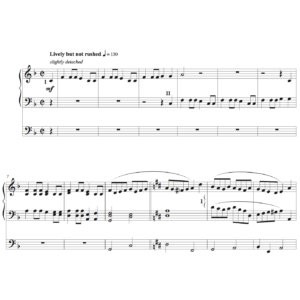 The beginning of the “Zacchaeus” prelude shares the spirited and dance-like character of the traditional tune. The middle section provides contrast and then builds to a climax at the end as Jesus tells Zacchaeus that he is “coming to his house today!” 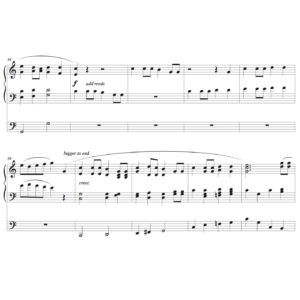 About registration and choice of manuals, the composer intends to leave this piece open to interpretation. The markings I, II and III in this edition are just one suggestion by the editor.

Following is an actual performance by the composer, Reid Gilliam. One thing to notice in this recording is the addition of random bells (a Cymbalstern stop), starting at 26 seconds. This is not written in the composition, but is a wonderful example of how to use different interpretations. You should likewise strive to have fun in your own performance.

(Performed by Reid Gilliam and featured on Contrebombarde)