I grew up loving Vivaldi’s Four Seasons and decided that I would do my own short piano version, trying to capture musically the characteristics of each season.

These are meant to be played together as a set, but of course may be played as individual standalone pieces. This collection will go on sale the last part of September with the launch of Melkim Classical.

All four pieces have a similar form: A-B-A-Coda, where the “B” section is in the dominant key.

A funny story here: as a high-school student, I submitted my first piece, “Winter,” into a statewide composition competition. First place went to some kid who wrote an avant-garde piece for a small ensemble (which I didn’t appreciate at the time), and I got third place. When we performed our pieces, I got more of an ovation, so I wondered why the other guy got first. Now that I’m older, I understand. The general population appreciates the more accessible music, while the scholarly types appreciate the more interesting and new music.

When it came time to interview me, the teachers asked why I changed the key signature to A‑minor in the “B” section—why didn’t I just use accidentals in the middle? I answered, “Because that’s what key it changed to.”

I originally composed this in 1986 to be included in a Winter-theme musical event at my high school.

For the “A” Section, I decided to go with “Fast and Cold,” trying to capture the idea of wind blowing anything and everything with unforgiving harshness and frostiness.

At “Briskly” make sure to hold the pedal down till you hit the next part.

“Snowfall,” the “B” Section, is a much slower and more peaceful part. The snow is pretty, but it’s also ruthless in its slowness.

In measure 57, accelerando back up to the original speed. 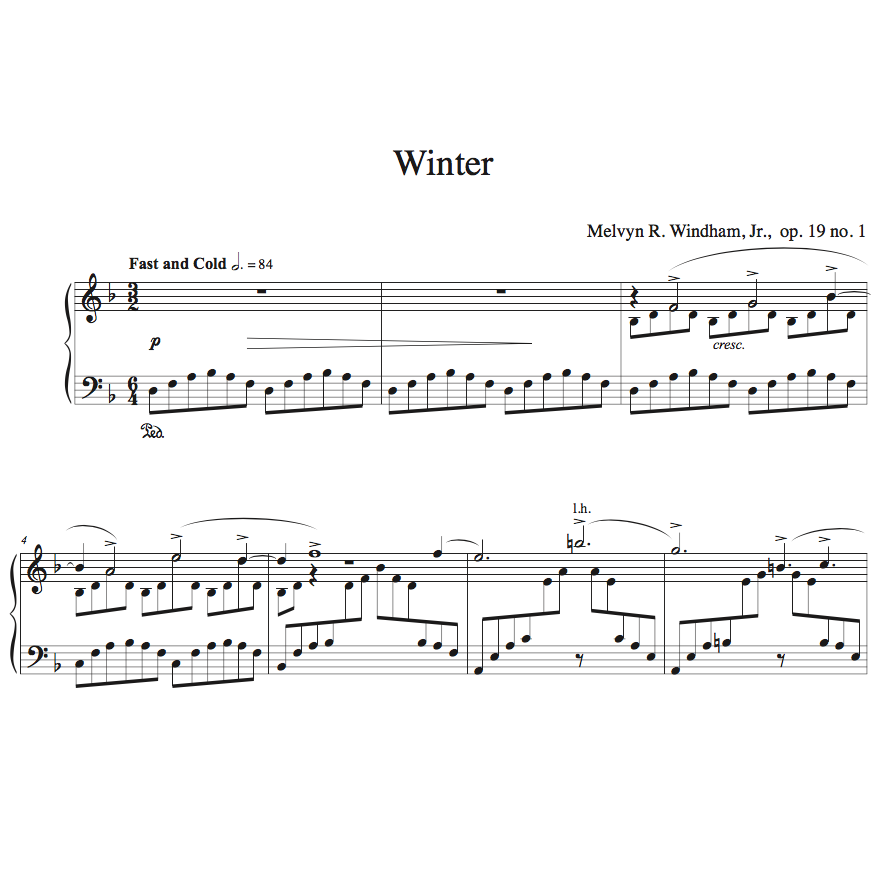 Composed in 1987, I decided to go with “light and pastoral.” The beginning channels a Mozart-like simple and dreamy theme. The “B” section, starting at the key change channels more of a Bach-like theme. Feel free to use the pedal liberally. Then return back to the original Mozart-like theme.

In 1992, I played this piece at a Winter dance/talent show and dedicated it to my future wife. It helped to win her over! 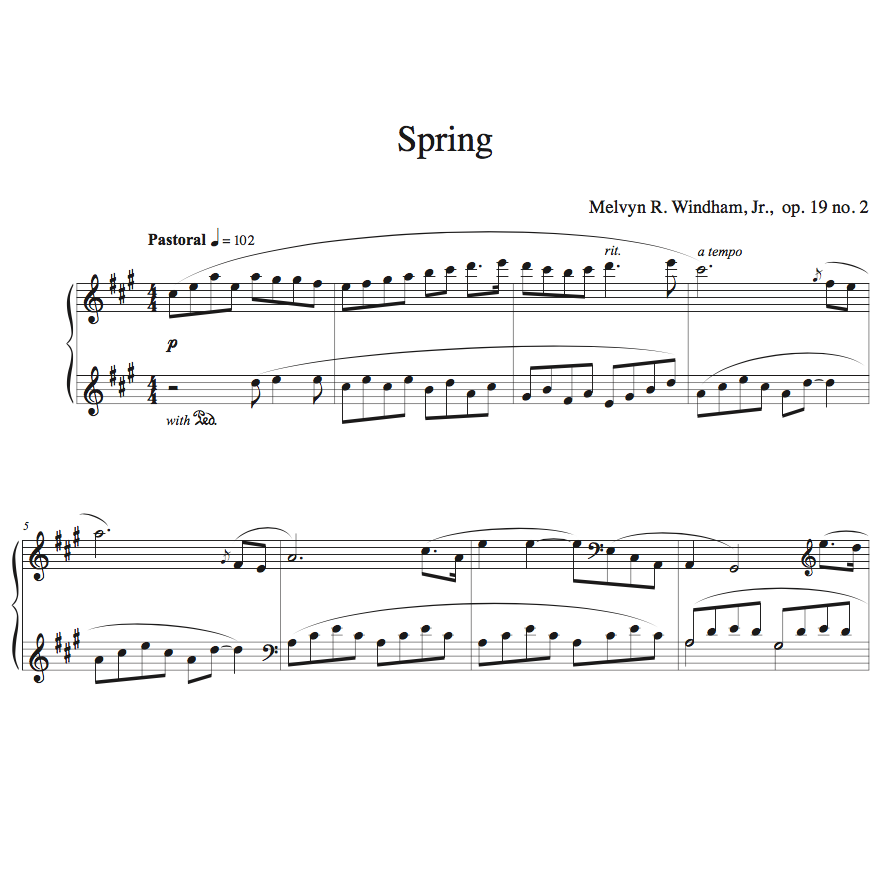 Having composed this one in 1990, I believe it sounds a little more mature than the other pieces. I decided to go with “Hot and Muddy,” meaning you can milk the pedal all you want.

I find the starting rhythms to be a little bit of a challenge, as the left hand starts with triplets, which then plays against the sixteenth notes in the right hand, resulting in 3:4. Try to hear the “4” rhythm before you begin playing.

You will see a grace note at the end of measure 8. This is meant to be a throw-away note that you fit in after playing the triplet and before moving on to the next measure.

In the “B” section at the key change, feel free to play with the tempo.

Starting with “soft, hot, and muddy” at measure 52, make sure to hold the pedal throughout the entire next section and play softly as you imagine the sun beating down on you with no shade to rescue you. And finally, move slowly back to the original theme.

I finished this one in 1988, right before I left on my two-year mission.

Some say I left the most depressing for last. While Vivaldi goes with pretty colors, I decided to go with Death. While you play, try to imagine the leaves dying off the trees and then blowing helplessly through the wind.

When you get to measure 35, make sure to always play softly, or the polytonal chords will get too muddy.

End the piece slowly and softly, and die out in such a way that the listener will gladly look forward to spring. 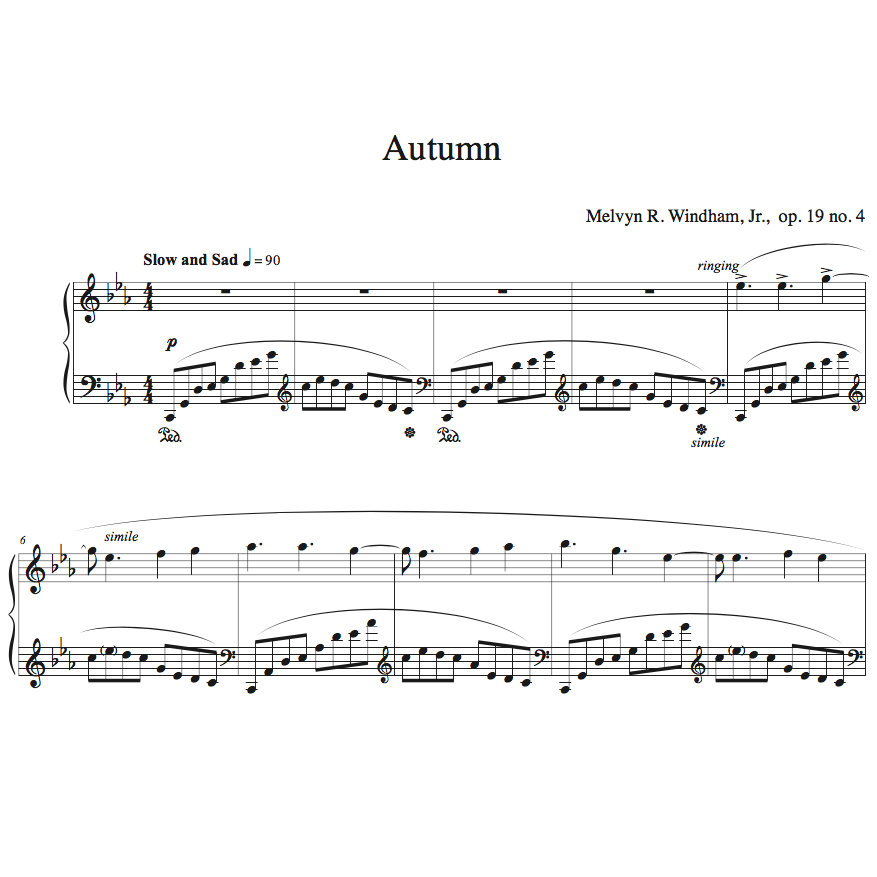