Just one more week and Melkim Classical will be live. Here’s another piece for you to look forward to, my very first sonata.

Following is a quick history and practice suggestions. Sound samples and videos are at the bottom of the post.

In 1990, I had just returned from my two-year mission in Korea, and I decided it was time to start working on my first “large” piece. Having played through all thirty-two Beethoven sonatas, plus several by Mozart, Haydn, and others, I decided to follow suit.

Shortly after my awesome decision, I asked my mother to pick a key – major or minor. She chose G Minor, and I started to work – a piano sonata for my mother. I quickly completed the exposition. The development group took a little more time, and then came the recapitulation. And that was just the first movement.

Along the way, I had also started and discarded failed second and fourth movements. The second will become a Theme and Variations as soon as I get around to finishing it.

I loved my Sonata, and proudly showed it to my composition teacher at BYU. He said he would look at it, but told me immediately that it was too “tonal” and the world didn’t need any more “tonal” sonatas. He never got back to me with a more detailed critique.

Now, here it is for you to decide. Does the world need this “tonal” sonata?

This is your typical sonata-allegro form. The Main Theme is a dotted rhythmic motif. The Secondary Theme is a little more subdued, featuring repeated notes. The Closing Theme features arpeggios.

The Development Group brings together all three themes, climaxing with a fun triplet-octave motif in the left hand starting in measure 76.

The piece suddenly slows at measure 90 before returning to the Recapitulation.

Overall, this movement isn’t too difficult. There are some hand crossings and sometimes you’ll have to figure out which hand plays which notes. Other than that, have fun and make sure to play with a steady fast tempo.

This is a slow Rondo form. The main theme is played three times, each time with slight variations. In between there are two completely different sections. In other words, it has a form of A-B-A-C-A.

Main Theme at beginning: play slowly with no rigor in the rhythm.

Measure 17 starts Section B. Play the triplets with the left hand.

Measure 36 starts Section C. You can play these sixteenth notes as fast as you wish. I’ve split the right vs. left hand notes as per my suggested performance. Though starting in measure 44, you may find it easier to play some of the treble bottom notes with the left hand. In some places, you can’t get away from having to roll some notes.

The final statement of the Main Theme in measure 52 can be played as slowly as you wish. Really play out the eighth notes in the middle. I’ve left it to you to decide which hand plays them. 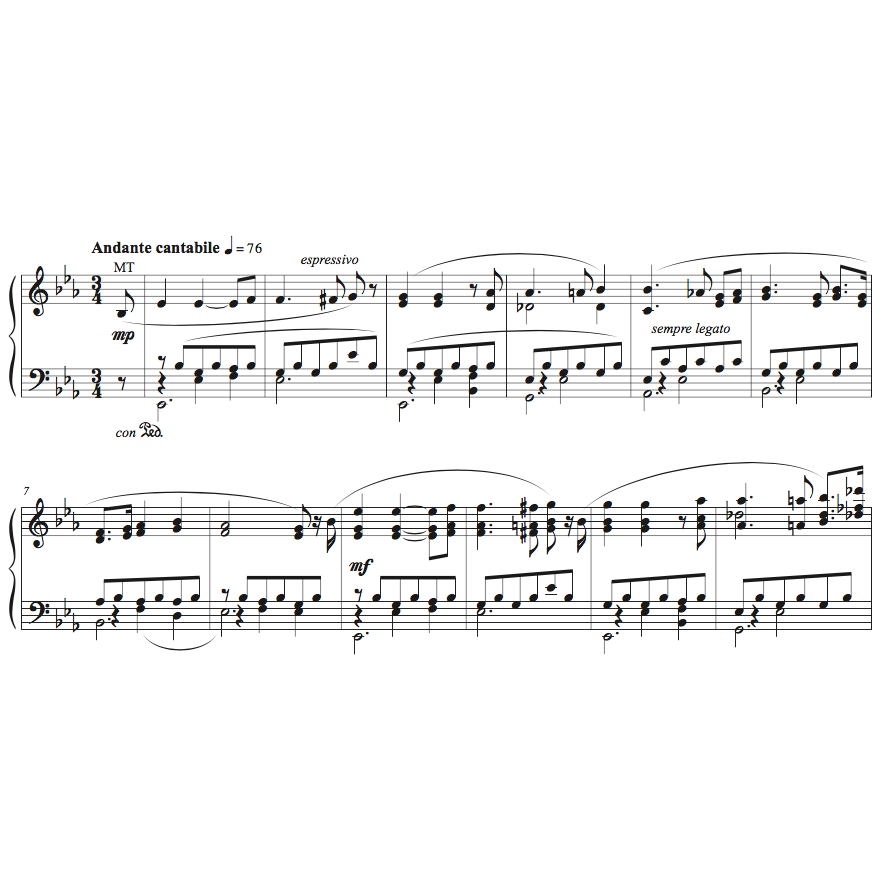 This is my favorite of the four movements. It seems to be the tightest and most interesting to me. It isn’t particularly difficult except for around measure 14 with the big chords. Just have fun. Play it with a steady tempo. Keep it light. 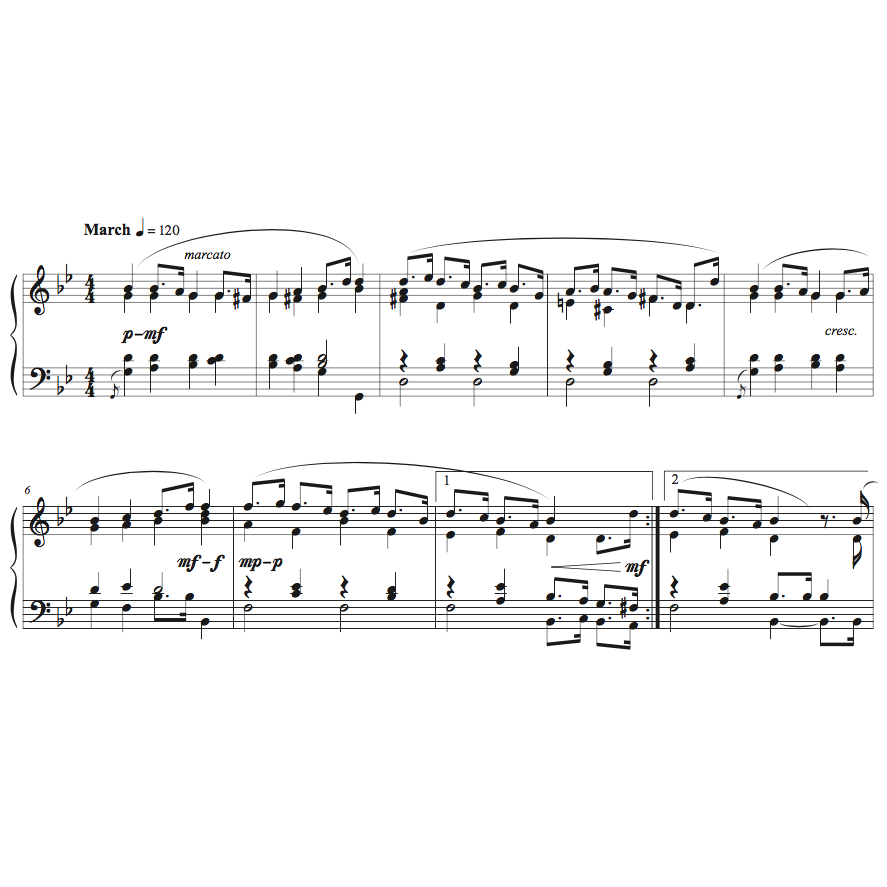 By far, this is the most difficult movement. It’s meant to be played as fast as you can, and to sound impressive.

Practice it slowly, and then build up speed.

This is another Rondo, with the form of A‑B-A-C-B-A.

Section C, starting in measure 55, features snippets from the other movements. Make sure to play up the different styles.

The grand finale is at measure 97. Really build up going into this section, and do a large ritardando. Notice how this movement’s Main Theme is combined with the Main Theme from the first movement. You can play a little slower here so as to emphasize the bigness. Have fun. Play it loud, and finish strong. 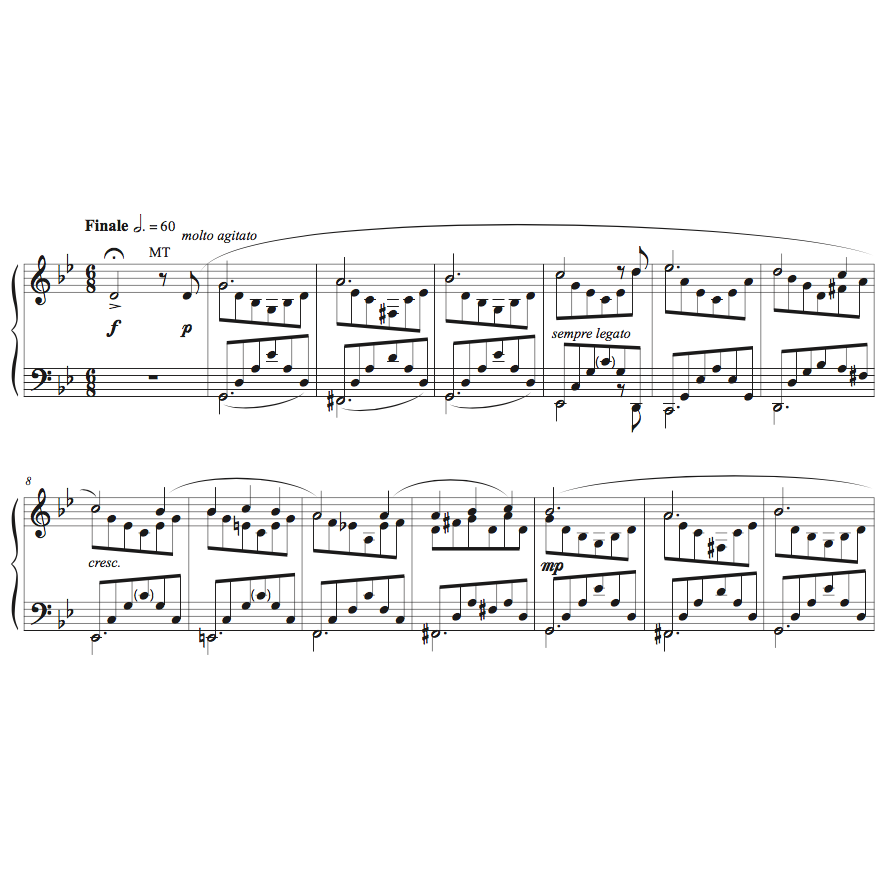 And a series of videos of me playing the whole thing: