For some reason to be revealed in the next few months, I wanted to do an arrangement of “Come, Come, Ye Saints” (buy). Since there are so many arrangements available, I knew it had to be a piece good enough to warrant its creation. It had to capture the words of the hymn and match the appropriate moods. As such, it was another one of those that took a few months to fully compose.

I finished the piano solo first, and when I played it for our Stake Music director, she insisted that I add choral parts. We didn’t end up performing the piece (long story that I’ll save for later), but we’ll get around to it over the next year or so.

As I wrote the choral parts, it came to a point where I realized I was composing really close harmonies — 4 parts for the women and 3 for the men, starting with the third verse. I became very concerned because I knew that less voices would be much easier to rehearse and perform, but the Spirit was insistent that my original inspiration was correct. This was not a piece of music to be watered down, but rather one to challenge and reward the performers and congregation.

The end result is a piece that should invite the Spirit and help the congregation remember the pioneers who came before them.

Here is a midi recording you can listen to while reading more detail.

The first verse is light and happy. Walking across the plains and mountains with a good attitude helps the journey to be more joyful.

The second verse is a little more pensive, asking why we should mourn, or why we should think to give up. This mood is brought out by introducing a small amount of minor key. The accompaniment attempts to capture the hardship of the walking. But as we take courage and push forward, the music becomes more flowing and positive.

The third verse considers the far-away promised land. This part is quiet. The piano plays high notes with the pedal depressed so as to capture the dream-like desires to arrive at the destination. The women sing first quietly in 4 parts, like an angelic choir promising and guiding. The men join in as well, adding 3 more parts. Then everything crescendos as the air rings with music and with praises to God.

The music quickly transitions to a soft mournful minor accompaniment. The choir spreads out again in 7 parts, singing about those who die along the way. When it gets to “Happy Day,” the minor key moves suddenly to a G-flat Lydian key, and as it continues to crescendo, the music returns to the original key of G at “With the just.” Then it happily considers those who are spared, and suddenly softens for “their rest obtain.” It finishes with one last happy swell, and one final modified repetition of the original light and happy theme. 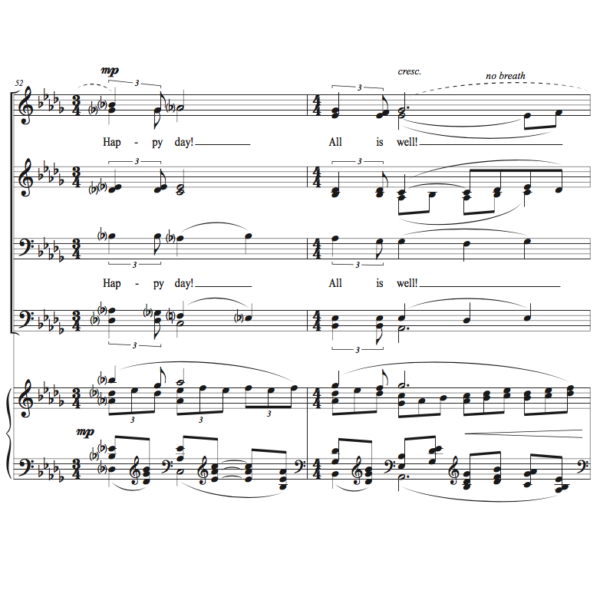