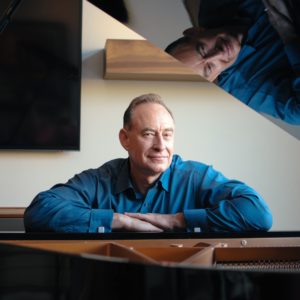 Daniel Carter is best known for his hymns and choral music. He penned the sacrament favorite #169 “As Now We Take the Sacrament” as well as the Christmas favorite “Star of Bethlehem (Shine For Me Again).” Just as with other composers, he has plenty of other music that isn’t quite as known, but just as good. Over the past few years, I’ve become acquainted with several of his piano pieces, both religious and secular, and I’m proud to present this sonata: “Summer 1989: Descriptions of My Son, Michael, at Age Two.”

This sonata is on the easier side, but still tricky. I had fun working it up, myself. It’s a lot like Kabalevsky or Khachaturian.

Daniel composed this to capture memories, but I’ve found that the music has a life of its own — fun to play and listen to.

Daniel Carter’s own words on writing this sonata:

When my son, Michael was two years old in the summer of 1989, he was a compact force of nature. He was a happy-go-lucky little guy who ran everywhere, and if you threw a ball to him—regardless of what kind—he instinctively seemed to know what to do with it. Hence, he has always been very good at sports. (And ultimately my musical influence rubbed off on him enough for him to try his hand at songwriting and playing in a few bands.) In a typical day, Michael would wake early and had the need to do everything that came to his mind. He was a happy imp getting into things, discovering everything, and was a basic whirl-wind of motion. When he would take a nap or fall asleep at night, he would sweat and soak his clothes with the amazing amount of energy he released as he recharged his battery. Today, Michael is a husband and dad with very active kids of his own, and I’m proud of the man, husband, and father he has become, as well as proud of his beautiful family.

The sonata itself is a study in soft dissonance, parallel chord structures, juxtaposed thirds in motion, chromaticism, pentatonic scales, whole tone scales and a mixture of time signatures. The Second Movement, although in 3/4 time, is actually only partially accurate. The right hand stays in 3/4 time, while the left hand pretends to change from 2/4 to 4/4 time. It just made more sense to notate the movement with three beats to the measure and use ties. The final movement remains mostly 10/8 time, which really feels a bit like a dance. In those early days it wasn’t unusual to watch Michael run, walk, jump, and even leap in such a way that I imagined him in a sort dance-like life.

This little sonata is not terribly complex and is meant to be very child-like, although it is deceptively tricky. I hope as you play or listen to this sonata that it will fill you with child-like joy, happiness, and the optimism of feeling the world is yours to explore.

This sonata is being sold through our Melkim Classical branch — rather than being music for church, it is music for fun or recitals, or just all around enjoyment. It’s just one of the several “classical” pieces we have to offer.

Daniel also has several similar pieces for sale at his own website. Check them out and enjoy.